What the backward Turkish nation considers secularism is not the separation of Church and State of the Western model, rather a Turkish secularist is a type of rabidly fervent fascist that elevates the state and nation to the level of a religion, referenced after Islam. Ziya Gökalp, one of the most prominent Turkish nationalist theorists(who himself was likely a Kurd, but pretended to have pure Turkic origins), outlined the contours of what is now termed Kemalism, the omnipotent Turkish statism, imputed falsely to Ataturk today(as Turks are quite proud of their historic ignorance):


Gokalp gave "the nation" an important mystical component. In his work, "he transferred to the nation the divine qualities he had found in society, replacing the belief in God with the belief in the nation: and so nationalism became a religion."[43] The national is deified, thus expanding Durkheim's idea that "society can do as it pleases." So, if a nation perceives itself in danger, it feels no moral responsibility in its response to that danger. The Unionist "scientific approach" gained a "sacred" character through Gokalp's theories.

cited in: Akcam, Taner. A shameful act : the Armenian genocide and the question of Turkish responsibility. (Metropolitan Books; 2006) pp. 88-9.

Further the Preamble part of the Turkish Constitution contains this fascist screed:

Affirming the eternal existence of the Turkish Motherland and  Nation  and  the  indivisible  unity  of  the  Sublime  Turkish  State,  this   Constitution,  in  line  with  the  concept  of  nationalism  introduced  by   the founder of the Republic of Turkey, Atatürk, the immortal leader  and the unrivalled hero, and his reforms and principles;

That no protection shall be accorded to an activity contrary to Turkish national interests, Turkish existence and the principle of its indivisibility with its State and territory, historical and moral values of Turkishness; the nationalism, principles, reforms and civilizationism of Atatürk and that sacred religious feelings shall absolutely not be involved in state affairs and politics as required by the principle of secularism;

Brainwashed Turks kissing the marble at Anıtkabir, the memorial tomb of the immortal dictator of the Turkish nation, Mustafa Kemal Atatürk,: 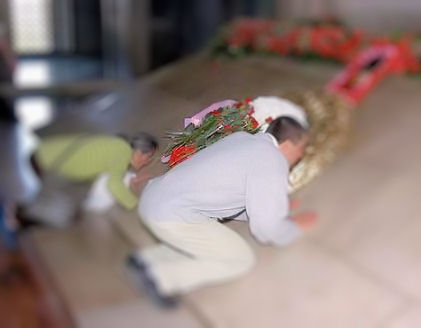 This more current article demonstrates how powerful in practice the official worship of the state with Ataturk, as it embodied, immortal, ever present Father figure is amongst the fascist Turkish nation:

Almost 85 years after Ataturk formed the modern state of Turkey from the remains of the Ottoman Empire, millions of Turks still flock to the mausoleum that contains his grave here in the country’s capital. So many that 2007 was a record year for visitors, according to the Web site of the mausoleum, called Anitkabir.

Last year, a total of 12.7 million people visited the monument, a figure lifted by a large demonstration in the spring, but still a 50 percent rise over the previous year and more than in any other year in the 54-year history of the monument, according to the Anka news agency.

Why the surge in visits to the grave of a man who died in 1938? For one, Ataturk is no ordinary man. He is referred to as the “immortal leader and unrivaled hero,” in the preamble to the Turkish Constitution. Insulting his memory is a crime in the penal code. The entire nation stops to mourn on the minute, each November, when he died.

Newspaper headlines last week told of a group of high school students who painted a Turkish flag using their own blood and sent it to the commander of the military. Last year, the authorities were forced to discontinue a lottery scratch card because its design was an outline of Turkey, and scratching off the eastern part was seen as an act of sedition. ...


Note: 2007 was the year of the so called "Republic Protests" in Turkey, where millions of the more fascist fake secular Kemalist Turks backed by their politically meddling military protested when they realized the more Islamic oriented Abdullah Gul of the AKP party would likely win the Presidental elections(which he did).
Posted by Nikephoros at 7:11 AM No comments:

Turks around the world and their bandit state have a huge involvement, in all manner of illicit activities from drug trafficking, migrant smuggling, nuclear weapons proliferation and even organ trafficking. The following excerpt from an article written back in May exposes the Turkish connection and liaison with Albanians also involved in the organ trade:

The New Yorker: Bring Up the Bodies

... Since the late nineteen-nineties, Istanbul—a short flight from Tirana—has been a destination for transplant tourism.

In late 2002, a K.L.A. member told Montgomery that the group had made “a fortune” by trafficking body parts, primarily kidneys. C., as Montgomery called the source, claimed that the K.L.A. received about forty-five thousand dollars per body. Most shipments involved body parts from “two or three Serbs,” though C. knew of an instance when the K.L.A. “did five Serbs together.”

That October, a young Turkish man, who had agreed to accept twenty thousand dollars for one of his kidneys, arrived at the clinic in Pristina. The kidney was removed and placed inside a seventy-four-year-old Israeli man, who had paid ninety thousand euros for it. The operations were performed by Dervishi and by a Turkish surgeon, Yusuf Sonmez, who is known in the Turkish press as Dr. Frankenstein, for his prominent role in the black-market organ trade. ...

Posted by Nikephoros at 7:27 PM No comments:

"When my friends were going to school, I, as a little girl of 13 had been married with a man, a friend of my father, in his 30s. I was scared when he was at home. I could even not enter in his room. I'll never forgive my father," said an unnamed child bride from Van province, now in her 40s.

It is difficult to determine the exact number of child marriages in Turkey as many go unreported or are unofficial "imam" (religious) ceremonies. "This makes the situation more problematic as they are not registered officially, making it difficult to track them," attorney Vildan Yirmibesoglu told SETimes.

However, according to the Hacettepe University Institute of Population Studies' data, the early marriage rate in Turkey -- defined as marriage at 17 years of age and younger in the 15-49 year-old age group -- is 28% on average. The number includes unofficial religious marriages and shows regional variation, with highs of near 41% in eastern and southeastern Turkey.

"When thinking of including women over 49 years of age it wouldn't be incorrect to say the numbers would be much higher," Dr. Ilknur Yuksel-Kaptanoglu of the Institute of Populations Studies told SETimes, adding that "Even though the numbers have been falling over the years, they are still high and continue to be a problem."

According to a recent report by parliament's Committee on the Equality of Opportunity for Women and Men, many families in eastern Turkey do not consider underage marriage a problem.

The Flying Broom Women's Communication and Research Foundation is one of the most influential civil society organizations campaigning against child marriage. They are active in 54 cities, meeting with child brides to give them a chance to tell their own stories.

The consequences of early marriages can be significant. It often leads to children dropping out of school and perpetuates the poverty cycle, but according to Guner it also contributes to domestic violence, incestuous relationships, health problems, and even death.

Girls between the ages of 15 and 19 are four times more likely to die in childbirth than adult pregnancies. According to statistics based on Yirmibesoglu's recent case studies, a quarter of women suicides in Turkey are from the age range of 14-16.


More info can found in the following PDF by the Flying Brides organization:
Flying News publication on ‘Early and Forced Marriage’

Posted by Nikephoros at 6:29 PM No comments:

As Turkey marks the 49th Library Week across the country this week, some librarians have stated that the poor reading habits in Turkey are due to the exam-based education system in which the cognitive and intellectual development of children is being neglected.

According to a study released by the United Nations Educational, Scientific and Cultural Organization (UNESCO) in January 2013, a smaller number of Turks read books regularly than people in European countries. The study states that in European countries 21 people out of 100 read books regularly, while in Turkey that same statistic is one person out of 10,000. Turkey ranks 86th in the world for the amount of time a country’s residents read, the study revealed. According to the study, Turks watch an average of six hours of TV a day and surf the Internet three hours a day but only dedicate six hours a year to reading a book. The UNESCO report also reveals that reading books is in 235th place on a list of things most valued in life by Turks.

Attributing the poor reading habits in Turkey to its education system, Turkish Librarians’ Association (TKD) Chairman Ali Fuat Kartal said during an interview with Sunday’s Zaman that Turkey has an exam-based system in which the students mainly only focus on preparing for the exams, adding that the students’ cognitive and intellectual development is neglected. “Another factor is that teachers at Turkish schools don’t read much. It is important for students to see their teachers reading, which might direct them to reading books. ...

Stating that the number of libraries is limited in Turkey, where the population is over 75 million, Kartal added that there are only 1,112 public libraries in the country, further stating: “The conditions of libraries are not very good as the books and other materials in the public libraries are not regularly updated. They are filled with outdated books. Libraries should be updated with newly published books at regular intervals to keep the interest of readers or visitors alive.”


However, a source from the same AKP that uses its state influence to get corrupt media moguls to self-censor their reporters so they can win state contracts for their holding company and when that fails arrest or charge journalists with terrorism, invents some creatively optimist facts about Turkish reading habits:

At odds with the first interviewee and the UNESCO report, Turkish Publishers’ Association President Metin Celal told Sunday’s Zaman that Turkey’s reading habits are not so much low as exaggerated. Pointing to a study conducted by the Culture and Tourism Ministry in 2011, Celal stated: “According to the study, 7.2 books are read per person a year on average in Turkey, which is not that low compared to some other countries in the world. Turkey has higher rates than most of the countries in the world. Despite this, Turkey’s reading habit rates are not yet sufficient.”

I will believe UNESCO and not the Turkish state's organs on this one.


Posted by Nikephoros at 7:25 PM No comments:


A 13-year-old girl [was] raped by 29 people, including a petty officer and students, in western Golcuk. Daily Milliyet said with her teacher's efforts a secret investigation was launched and 29 people were taken into custody in charges of having intercourse with the underaged and blackmailing. 8 of them, including the petty officer, were arrested. The girl is under psychological treatment.

Note: Gölcük is in Western Turkey where the allegedly advanced white Turks of the fake secular type tend to preponderate.
Posted by Nikephoros at 2:28 PM 2 comments: